November 2016, health problems intruded into our lives. Our grand plan for traveling around the West and camping with our horses in scenic locations had to be put on hold. Nevertheless, by the following June 2017, we were determined to take a few short trips to nearby campgrounds. One of the reasons we chose to move to south central Colorado was because of the many horse trails in the area. One place we had been wanting to visit was Picketwire Canyon in the Comanche National Grasslands, the site of the famous dinosaur tracks. After a little research, we decided to begin our ride at Vogel Canyon where we could view some rock art. After our ride we would camp at the nearby Picketwire Corrals, and the next day haul the horse to Withers Trailhead. 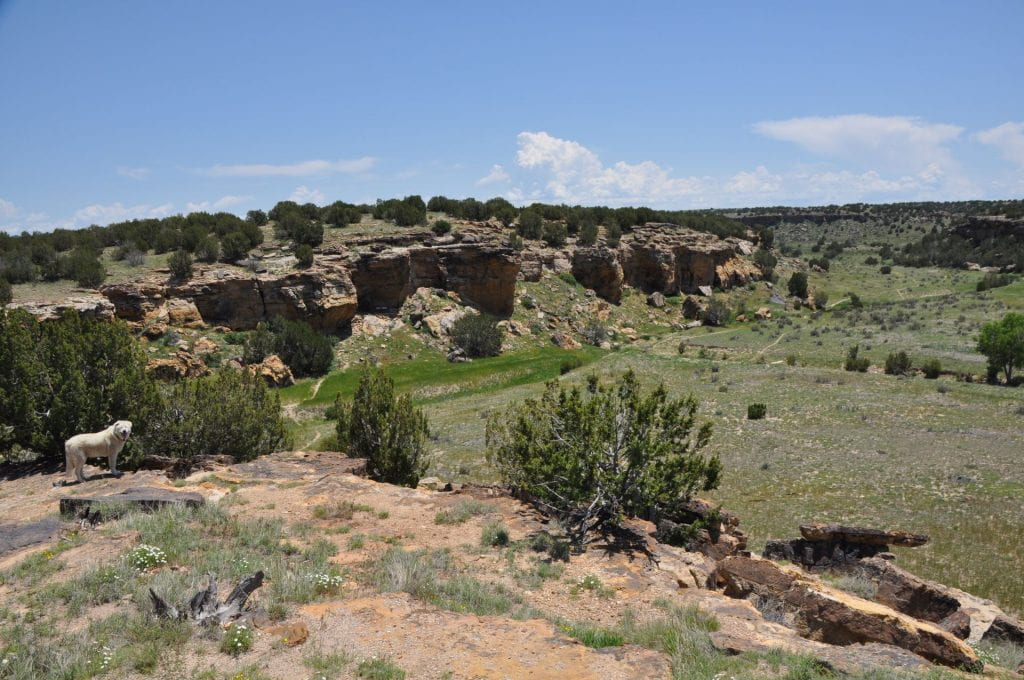 The drive from our home to Vogel Canyon only took about an hour and a half, so we had much of the day to explore. We began by taking the Canyon Overlook trail. It was easy riding, the June sun warm and the morning breeze refreshing. 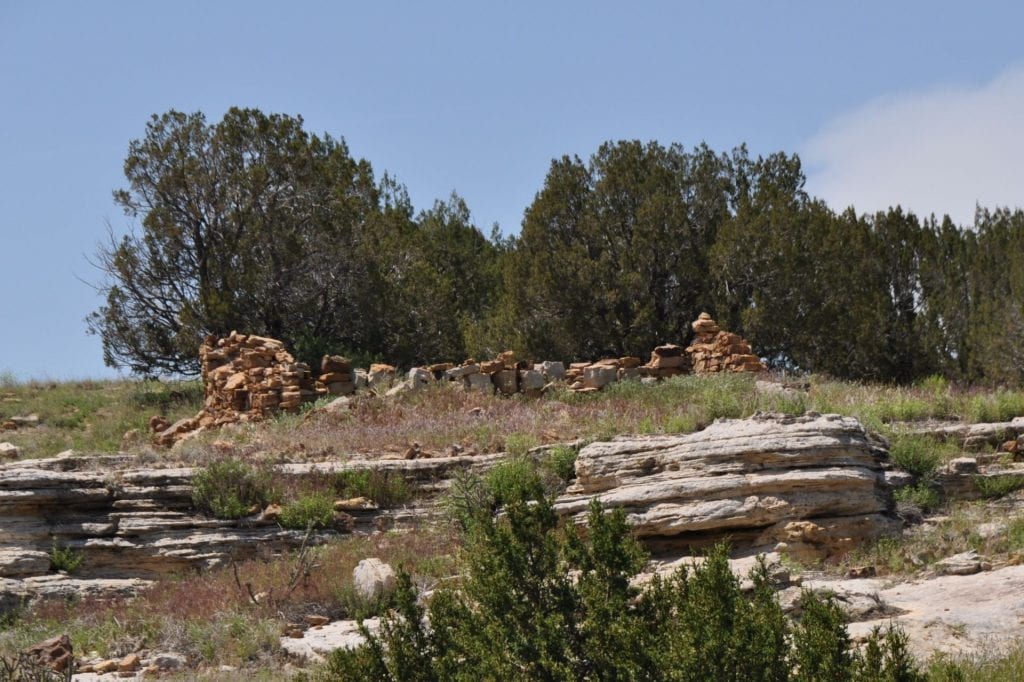 However, the trail was only one mile long, so we returned to the campground (not for horse people), and then followed the 1 3/4 mile  Canyon trail. This was more interesting, for we saw the ruins of a homestead abandoned during the Dust Bowl of the 1930s, the stone corrals of an old sheep ranch, and petroglyphs. The valley was beautiful, lush and green with a stream flowing through it. Our dog, Bear, thoroughly enjoyed splashing in it. Sadly, when we arrived at the cliffs, we discovered that vandals had been defacing the primitive drawings for decades. Next we headed toward the Mesa Trail (2 1/4 miles) in order to visit the ruins of a stagecoach station and then take the three-mile long Prairie Trail that would follow the stage coach route. There were ladders to cross the fence to these trails but, unfortunately, no gates for horses. Presumably, these trails are only for hikers. After riding the whole fence line, we went back to our horse trailer and drove to the horse camp. 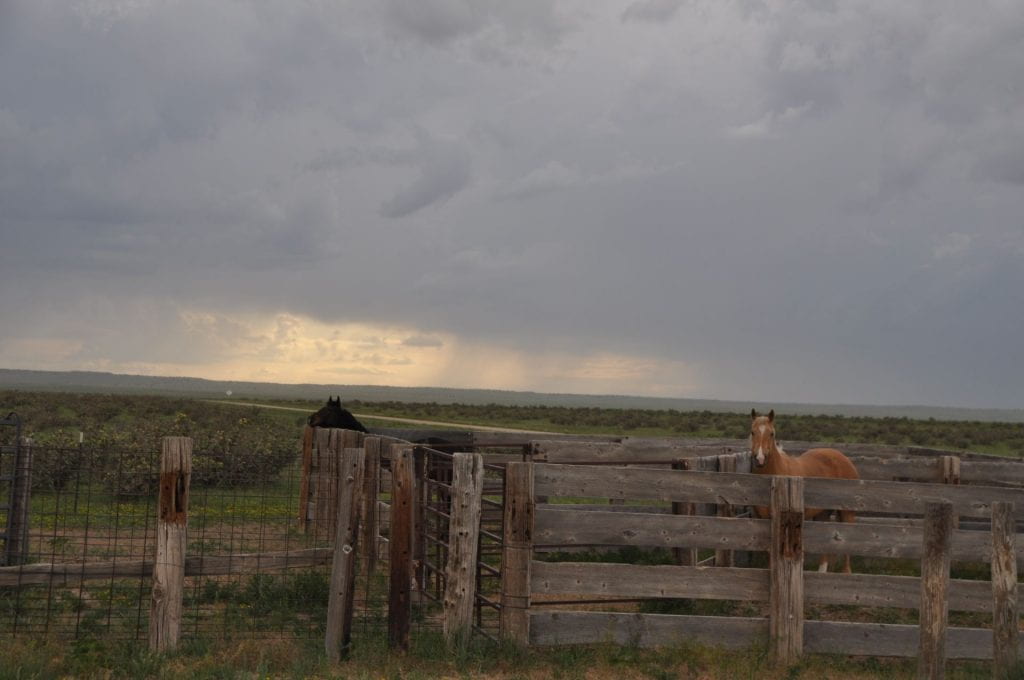 The Picketwire Corrals and primitive campground is situated on the flat prairie grasslands between the two canyons. The corrals are large and safe, and there is plenty of fresh water and a clean vault toilet. A couple of Meadowlarks, perched upon some fence posts, carried on a lengthy conversation as we set up camp.  Soon, we could see a storm approaching us from the west. We watched as it came closer and closer, and it reminded us of Nebraska where we had lived all of our life until a few years ago. There, too, we could watch storms race across the plains towards us. This one veered north, and only a few fat drops fell, helping to settle the dust. We experienced what the Native Americans and early ranchers must felt, a sense of smallness in such a vast landscape. It also put into perspective our current problems. Like the storm, they, too, will pass by.

The next morning after breaking camp, we packed up to head to the Withers Trailhead. While taking one last check of the trailer, we noticed that we had a flat tire. After unloading the horses as well as most of the tack and feed from the tackroom to retrieve the spare tire, my husband handily fixed it, and we were soon on our way.

Although the road to the trailhead was only about 3 1/2 miles, the extreme spring rains that had eroded the dirt in several places as well as the many curves made travel with the horse trailer excruciatingly slow. I knew that the round trip to the dinosaur tracks was over eleven miles and that we needed an early start, but the flat tire delay and now the road condition were setting us back. By the time we were saddled and started on our way, it was about 11:00. So much for the cool of an early morning ride.

The ranger we had talked to on the phone had warned us that the first part of the trail would be steep, a 250′ descent into the Picket Wire Canyonlands along the Purgatorie River. She did not, however, note that the trail was mostly rock shelving and slippery. We made our way down slowly and carefully into the valley, even leading the horses at places, and began following a well-worn trail. So far so good. We had brought some water for ourselves, but since we saw on the map that we would be following the river, we did not bring any for Bear. As we wound our way through the wide valley, the sun became hotter and hotter and more humid than usual for Colorado, probably because of last night’s storm. Bear was really thirsty, but the river was inaccessible, so we trudged on. The valley was all the same, rocky, sandy, and full of sagebrush, musk thistle, and stunted junipers with no shade anywhere.

About halfway to the dinosaur tracks, we came to the ruins of the Delores Spanish mission and cemetery. According to the US Forest Service, eleven Mexican families created the first permanent settlement here around 1846 when the area became part of the United States. It was not until 1898, however, that a Catholic church, called the Delores Mission, was established. Although we could see no other ruins of homesteads nearby, the headstones of the cemetery stood guard over the cholla cactus, the names on the stones softened by time.

We were seriously considering turning back until we saw a faint trail heading toward the river, so we followed it, hoping to water the horses and dog. We were in luck, but the detour added another mile to our journey. 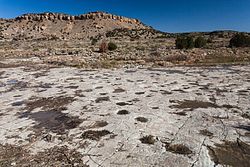 The mid afternoon sun beat down relentlessly, a surprise to us since it was early June; our horses no longer looked around them, but simply put one foot in front of the other until we arrived at the famous tracks. Our research had told us that this was the largest dinosaur tracksite in North America and dated back to the Jurassic period, 150 million years ago. Over 1,900 individual footprints dotted what was once part of an enormous lake in this Purgatoire Valley. The best part of the history for me was that a young boy living in the area told his country school teacher about these strange tracks, and that was when archelogoloists learned of this site. Sadly, as the ranger had explained to us earlier, the extreme floods that spring had silted in many of the tracks, and that was true, but we could still see the indentations as well as a few more clear ones that were on higher ground. I was in awe. We ate our peanut butter and jelly sandwiches and drank our hot Diet Cokes. A large sign on the path to the river where we wanted to water our horses proclaimed, “No Horses Beyond This Point.” Being good people, we obeyed. Bear didn’t have to, so he lay down in the river and revived.

We had planned on continuing to the Rourke Ranch, a National Historic site that was homesteaded in 1871 and grew from 40 acres to 52,000 acres, the oldest, largest, and one of the most successful cattle ranches in Colorado. However, the round trip would have added another 6 miles to our journey, and the dog, the horses, and my husband outvoted me. As we were tightening our cinches to head back, a hiker (a retiree like us) stopped by to say hello. He said that he was from Orlando, Florida, and he raved about the canyon, its peacefulness, its solitude, its beauty, and the incredible weather. He had walked from the same trailhead that we had, and he was planning on visiting the ranch before heading back. After he left, my husband and I looked at each other, amazed, and a little ashamed of our complaints.

As we began our journey back, I looked at the landscape with different eyes. The rock walls of the canyon WERE beautiful, I found flowers blooming that I had not noticed before, the sky WAS a clear and brilliant blue, and in the late afternoon, it was finally cooling off. We also discovered rock art in several places that we had missed earlier. I had read that this valley had once been a favorite spot of Native Americans throughout the centuries and that some of the designs dated back 4,500 years. The most mysterious one was very geometrical and encircled a huge rock standing solitary in the grass. I wondered what the drawings reported since it appeared that they were not all etched at the same time. Fortunately, no one had vandalized any of these ancient drawings, probably because it would be too much work for “Those Kind of People” to walk that far.

We returned to the trailhead, all five of us tired, thirsty, and hungry with another storm gathering in the west. We loaded quickly and headed home, making it back to the paved highway just as the storm hit, pelting us with torrents of rain. Although our little getaway had not been what we had anticipated, we would still recommend the Withers Trailhead and the dinosaur tracks to other equestrians. After the 250′ rocky descent into the canyon, the trail was flat, smooth, and well-traveled. However, we would attach some warnings. Visit the site in early spring or late fall and pack lots of water for all. The forest service had warned on their website, “Because of the rugged terrain and long distances to various sites, hikers, bikers and equestrians need to plan for extreme heat. Leave early and carry at least one gallon of water per person” [their boldface]. An eleven-mile round trip had not sounded like much to seasoned trail riders like us, but believe me, it felt much longer.