(For more information, see my biography The Adventures of The Woman Homesteader: The Life and Letters of Elinore Pruitt Stewart published by the University of Nebraska Press. Photographs may not be used without permission.) 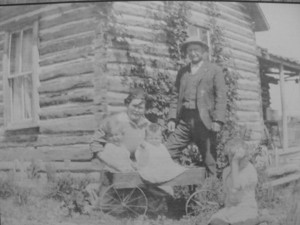 Born in Indian Territory in 1876,  Elilnore Pruitt Stewart’s parents died within one year of each other, and at 18 she became responsible for caring for her five younger brothers and sisters. Stewart began her escape to a better life between 1907 and 1908 while still living in Oklahoma.  Leaving behind a life of childhood poverty and a failed marriage and taking along her younger sisters, Susie and Josephine, and her infant daughter, Jerrine, she boarded a train for Colorado where she planned to visit the Mesa Verde cliff dwellings.  A serious illness caused her to reroute to Denver where she had no job, no money, and knew no one.  Eventually Stewart obtained work from the genteel Mrs. Juliet Coney.  However, she labored seven days a week for two dollars as a nurse and housekeeper for the long-widowed schoolteacher from Boston in addition to helping out at the Sunshine Rescue Mission’s day care Nursery to pay for Jerrine’s child care.

Life did not seem to be working out for Stewart as she had planned. The major purpose of her decision to homestead was to escape from her dismal jobs of cooking, washing, and stoking coal furnaces in crowded Denver and of having her child cared for by strangers.  Although devoted to her employer, when the enlarged Homestead Act passed in 1909, enabling the head of a family to claim government land, Stewart found her way out.  She answered Clyde Stewart’s advertisement in the Denver Post for a housekeeper on his Wyoming ranch and moved to Burntfork with him in 1909.

Stewart made her escape to Wyoming by stagecoach.  She first glimpsed what the frontier had to offer aboard the rickety conveyance, plowing through mud in the jolting coach while the colorful Mormon driver “insisted on making love all the way” (LWH 4).  Since Stewart explicitly mentioned Twain in Homesteader, she may also have been alluding to his western travel book, Roughing It, in the final line of the final letter of Homesteader, adding emphasis with quotation marks:  “I just love to experiment, to work, and to prove out things, so that ranch life and ‘roughing it’ just suit me” (LWH 282). She filed on a 160 acre homestead adjoining Clyde’s, and eight weeks later, became Mrs. Clyde Stewart.  With strength and determination she “set out to prove that a woman could ranch if she wanted to” (LWH 279). 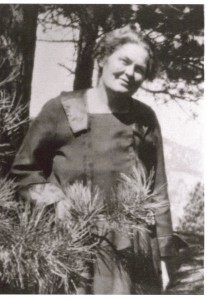 The nearest settlement, Green River, lay sixty miles to the north, a six day round trip by wagon over sage-covered badlands. For Stewart, letter writing became her primary link with the world. It satisfied several needs, providing not only emotional and creative outlets for her pent-up thoughts and feelings, but also filling her need for female companionship. Stewart’s personal letters provided her with a method of expressing her need for emotional support and for female ties. Her well-known correspondence with Mrs. Juliet Coney, her former employer from Denver and the basis for her two published books, demonstrate such a bond. After moving to Wyoming to homestead, Stewart continued her relationship with Mrs. Coney through letters chronicling her happy, new life in the West. In a February 19, 1914, letter to Miss Maria Wood, a long-time correspondent from Missouri, she explained the bond she felt with Mrs. Coney:  “The grandmother I loved so fondly was eighty-four when she died more than three years ago.  All my life I have loved old people best and Jerrine is the same way.” A sort of mother/daughter bond developed between Stewart and Coney, providing the orphaned Stewart with maternal support.

Today, The Woman Homesteader’s elevating sense of individualism, of self-reliance, and of compassion are attracting a new generation of readers, many of whom are overwhelmed by a sense of powerlessness caused by the complexities of modern society, and who long for new beginnings in a new frontier.  Stewart has become a model for women who want to prove that they, too, can accomplish what they set out to do.