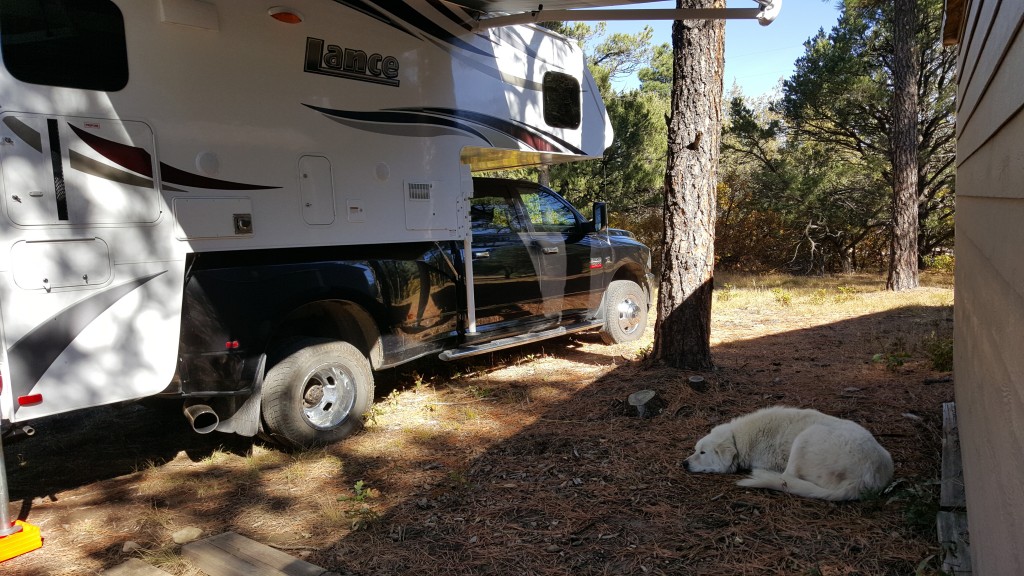 Because our thirty-five foot horse trailer/camper was not very user friendly in smaller campgrounds, this fall we decided to downsize to a pickup camper and pull our small three-horse trailer. So, the last week in October, we decided to take the camper for a trial run before it was time to winterize it. I was surprised that we were able to fit almost everything that we had stored in our big trailer into the smaller quarters, and we even had some space left over. Fortunately, the large tack room in the trailer and the extra stall helped store a myriad of necessities.

We had already scouted a nearby state recreation area north of our home near Cordova Pass, but after looking at the weather report and seeing that a snow storm was forecast for our planned dates, we decided to head south to New Mexico. After surfing the internet for campsites that allowed horses, we settled on Cimarron Canyon State Park located between Raton and Taos on Highway 64 and only about a three hour drive from our home. The State Park has three full campgrounds between Eagle Nest and Ute Park, but we chose the Maverick Campground because it offered corrals and provided access to trails in the Colin Neblett Wildlife Management Area, 33,116 acres in the central Cimarron Range of the Rocky Mountains. The website also explained that the trails were old, non-maintained logging trails with many unmarked intersections. That sounded exactly like what we wanted, so we loaded up and left early on Wednesday morning, hoping to miss the weekend crowds and spend several days exploring the mountains.

One of our concerns with our new setup was if our 2010 3500 Dodge Ram dualie would be able to carry the 3,800 pound camper filled with water plus pull our three horse trailer loaded with tack, feed, and two fat horses up mountain inclines. The salespeople assured us it could, and Terry had crunched all of the numbers. Theoretically, it would be no problem. The test would be the Raton Pass into New Mexico. I held my breath and leaned forward while Terry kept a close watch on the gauges as we climbed to the summit, but the truck was a trooper and handled the steep mountain pass with ease. 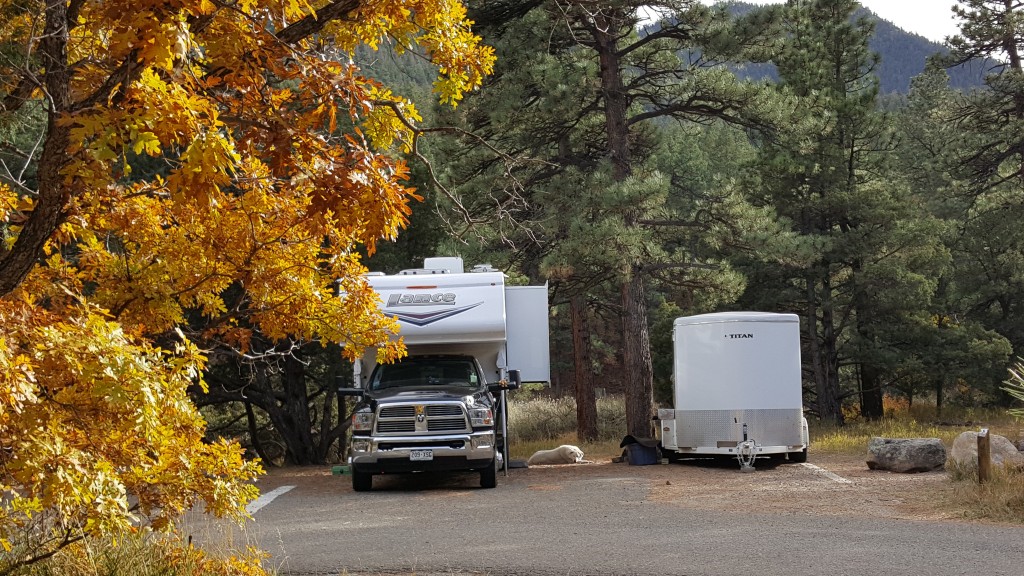 Although sections of Highway 64 are badly in need of resurfacing, the trip to the campsite proceeded smoothly. We were pleased to discover that all of the campground roads as well as the parking spots were paved; better yet, there was only one other campsite occupied, so we were able to choose the site with the best view of the corrals directly across the highway. Terry had plenty of room to back the trailer into the parking space although we had to unhook and park the pickup beside the trailer. Actually, this proved to be a very practical setup. Nearby by was a campfire site with a grill and a picnic table. The only downside was that the park had been winterized, and all of the bathrooms and water facets had been closed. No problem for us as we are self-contained–with solar power and a generator.

Before we set up our camper, of course, we had to settle the horses into their new quarters, some very clean, safe pipe corrals across the highway south of the campground. We had our choice of four corrals, none of which had been used recently, so each of the geldings had his own space. We brought over hay and the water buckets, 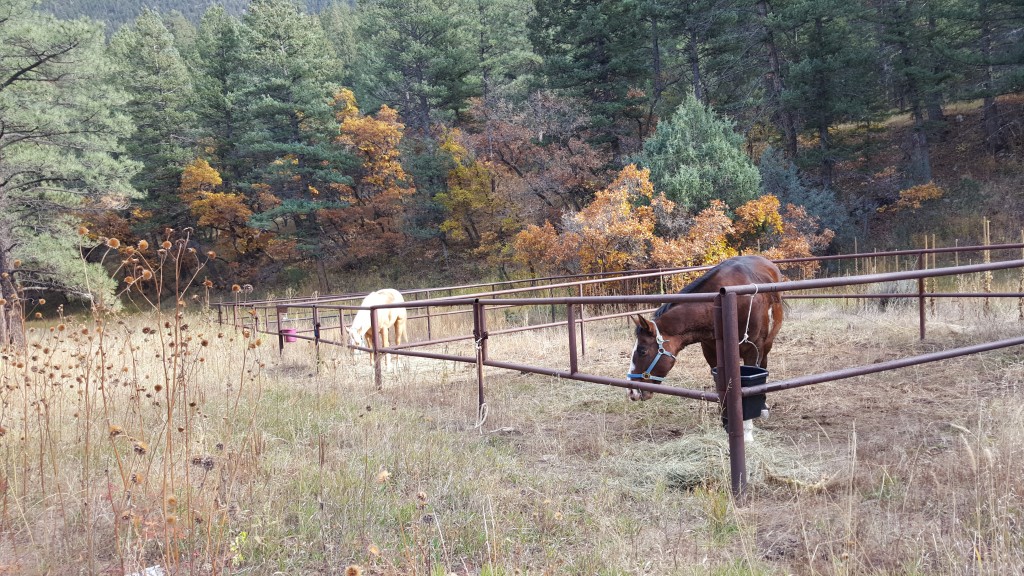 discovering in the process that I had forgotten to pack two sets of buckets, one for feed and another for water. I did bring a small bucket for carrying water, though, and it was easy to dip out cool, clear bucketfuls from the nearby Cimarron Creek. We would deal with the grain issue later.

Leveling the camper was easy on the paved lot, so after eating a quick lunch, we had to the whole afternoon to go riding. Fortunately, a friendly woman whose husband and son were out hunting on the last day of deer season, gave us excellent advice on the various trails and where to find them. After donning our blaze orange headgear and putting a bright neckerchief on Bear, we were on our way! 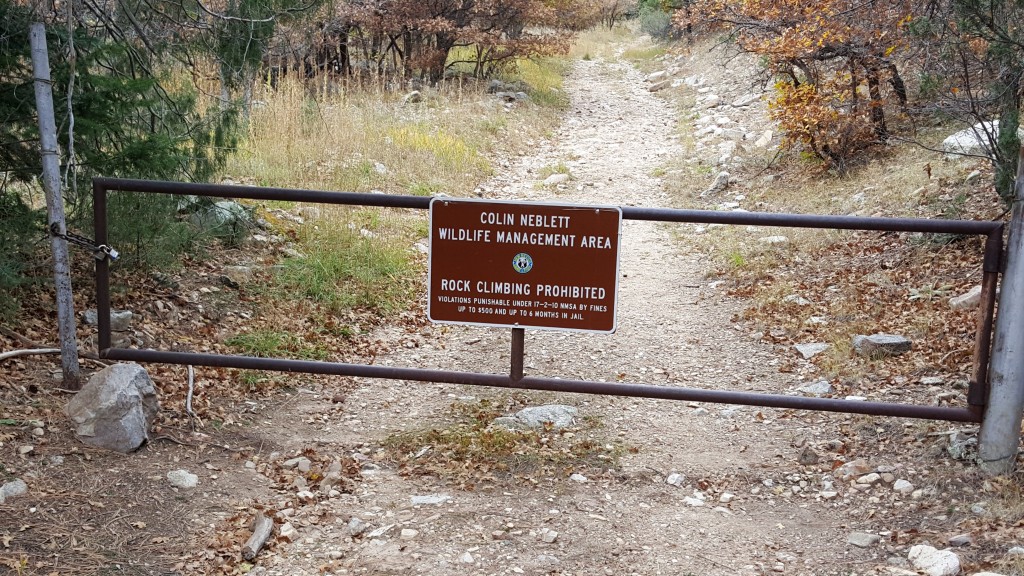 Threading our way east through the campground, we found the footpath that lead to the wildlife area. Unfortunately, we had to ride along the highway for about five hundred yards to the jeep trail that led to the entrance Fortunately, we did not encounter much traffic this late in the year, but during the summer, I imagine it is much busier. Although the gate to the Colin Neblett Wildlife Management Area had a chain to prohibit motorized vehicles from entering, we had no trouble going around it and starting up the trail. We had kept Bear on a long leash beside us, and he was happy to be set free here.

The trail followed a wooded valley for about a quarter of a mile, and then the steep ascent began. The road was rocky but safe, with sheer rock cliffs on the east, and a drop off to the west. Now we understood the prohibition on the gate for rock climbing. We had to rest the horses a couple of times to catch their wind, but after about a half of a mile (although it must have 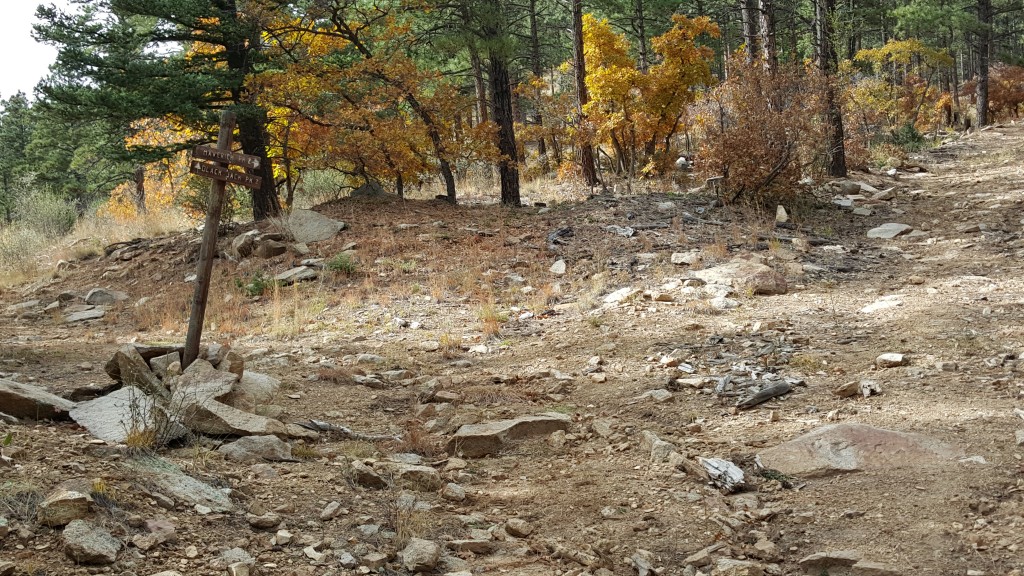 seemed longer to JJ and Mac), we came to the proverbial fork in the road. To the left was Black Jack Trail and to the right was Maverick Trail, the main trail. Since we only had one half of a day to ride, we chose the Black Jack Trail that followed a valley and a stream. The route was level and scenic until we came to a large branch across the path that we couldn’t move or go around. Terry had remembered to bring our folding handsaw on the trip, but we had left it at the campsite. Pulling out his trusty Leatherman and applying it with much effort, Terry was able to clear the path, and we proceeded through the trees. Soon the trail narrowed beside the stream, and we came upon a dead tree that blocked the trail. Not even the handsaw would have helped, so reluctantly we turned around. Since it was too late to start up another trail, we headed back to the campground. 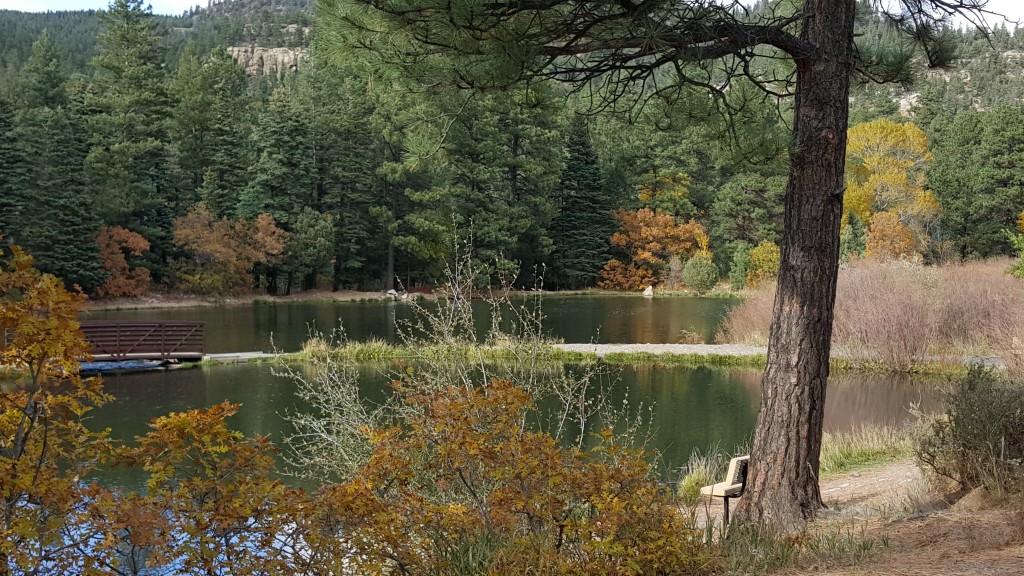 We bedded down the horses, using the dog dish to take turns graining them, and then decided to explore the campground. They didn’t seem to mind. Nor did Bear. To the north of the campsite is a large lake stocked with trout and fed by a fork of the Cimarron River; another fork of the river flows to the north around the lake, so people can fish either the river or the lake. We met one couple who said that they were in the prime fishing spot on the lake, a metal bench beside a small waterfall that divides the lake into two parts. They said that the fishing was excellent, but that in the summer, the park was very full with lots of people fishing. We followed the path around the lake that offered several fishing spots as well as metal benches to just enjoy the scenery.

Next we gathered kindling to start a fire but used out own drier wood for cooking. Terry soon had the grill ready to begin supper, chicken thighs fried in our new cast iron skillet. While it was cooking, we enjoyed refreshments and trail mix with Bear discovering that he liked peanuts–a lot! The chicken turned out perfectly, and even though we decided to make it a one-course meal, we were satisfied. And so to bed. We set the thermostat to 62 degrees because we were not sure how the solar powered batteries would hold up, but under our goosedown comforter, we were toasty. 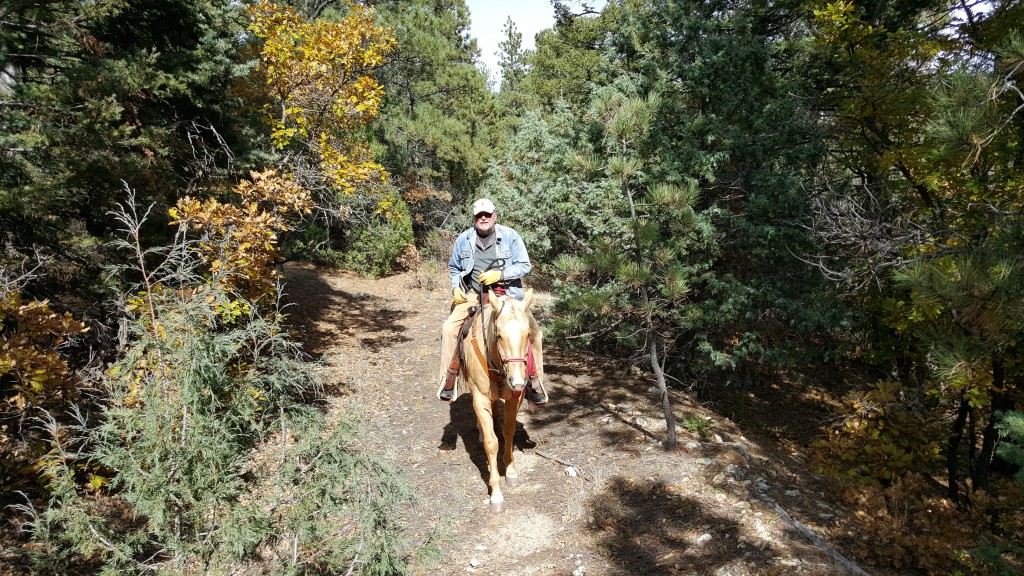 The next morning after breakfast for everyone, we decided to take a lunch and make a day of it, so we packed the leftover chicken, trail mix, Diet Cokes, and the portable handsaw and headed off. The hunters had returned the previous evening and told us of an excellent trail that led to the right just before the Maverick and Black Jack fork, so we decided to try that. The trail wound around the mountain and through the valleys, and although we were steadily climbing, none of the grades were too steep or too rocky. The only glitch was that the trail became faint at one point, and we turned left instead of continuing and had to backtrack to pick up the trail again. After that, although it was unmarked, the trail was clear. That was fortunate because our GPS kept losing its signal and would not have been a good guide home! 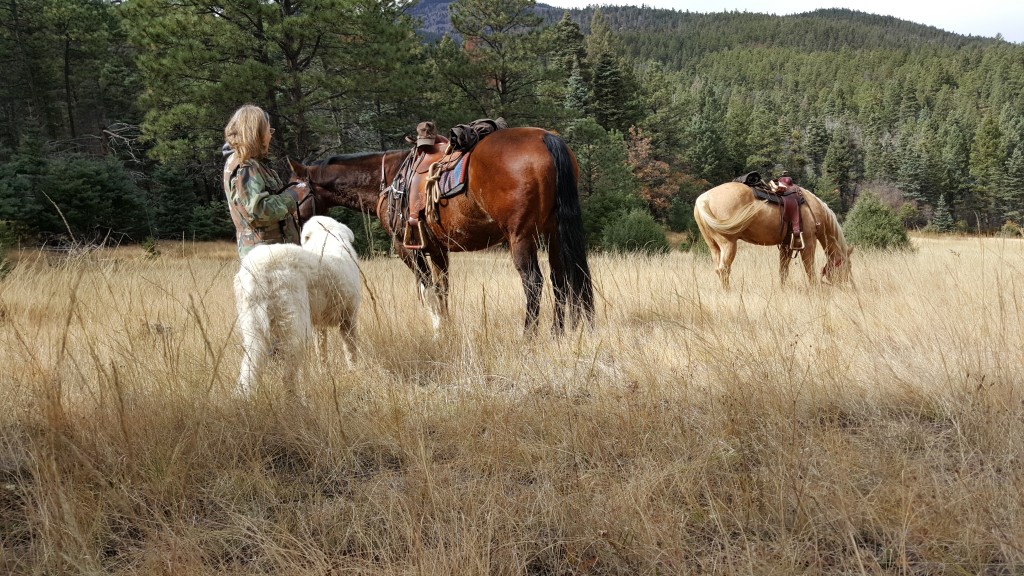 After riding for several hours, we came to the large clearing that the hunters had described. The sun was warm, the breeze cool, and the grass comfortable. We loosened the cinches, took off the bridles, and let the horses graze while we feasted on cold chicken. It was a great rest break for all of us. However, we took turns holding one of the horses–a safety measure we learned from a past experience. But that is another story!

We were planning on continuing, but again the trail became faint, so we decided to turn back and go down the mountain. We noticed on the return that the trail was plainly marked with red diamonds, but on the backside of the trees we saw on our way up. The trip back to the fork was much quicker than the climb, and since we still had time to ride before dark, we decided to try the Maverick Trail. We followed it until another fork in the road appeared, one to the left marked Maverick with a hand and finger pointing ahead, and an unmarked trail to the right. Again, we decided to take the road less traveled and veered right, saving the main trail for the next day. Suddenly, the temperature began dropping, so we turned around and headed back to camp. It had been a perfect day on great trails with beautiful scenery.

When we arrived back at the camp, Terry pulled up the forecast on his cell phone. Eighty percent chance of rain changing to snow overnight with more of the same the next day. Although we really wanted to follow the Maverick Trail, we had already logged over 15 miles in a day and a half, so we were happy. Deciding not to gamble on crossing an icy Raton Pass, we loaded up to return home. As we headed up I-25 toward Colorado, we saw an ominous front coming our way. I guess we should have expected that in the mountains at the end of October. Spring will come soon enough, and we can go camping again.