This River Beneath the Sky 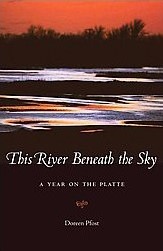 This River Beneath the Sky:
A Year on the Platte
by Doreen Pfost
(University of Nebraska Press, 2016)

Seldom have I read a work of nonfiction, especially one focused on ecology and the natural world, that has gripped my attention from the beginning pages and kept my interest almost non-stop to the end. Normally, I read such books sporadically, interested but not riveted. Not This River Beneath the Sky by Doreen Pfost. She braids nature writing, conservation issues, and memoir into a narrative that flows as smoothly as the many channels of her beloved river. Pfost organizes her twelve chapters around the calendar year and one specific location on the Platte River in central Nebraska. She begins with the arrival of the sandhill cranes in the early spring and ends full circle with their return the following year. This not only provides a full portrait of the river through all of the seasons, but it symbolizes the recurring cycle that has lasted throughout the ages, a reassurance that although generations may come and go, nature perseveres.

This book is extra special to me for two reasons. First, my roots are deeply embedded in the Nebraska soil, for I grew up playing in the Platte River and have witnessed its changes, the crane migrations, and the wildlife in that area of Nebraska for most of my life. Second, I was on Doreen’s thesis committee when she first conceived this project. We knew back then that even the few chapters she submitted could turn into a major work if she would only continue to write. For many, a thesis is simply a goal met; for Pfost, fortunately, it was a springboard! These personal connections, I believe, make me a better reader because I can speak with authority.

One major channel of Pfost’s text traces a history of the Platte River, one of the reasons she initially tackled this project. As a newcomer to the state, she began working as a volunteer at the National Audubon Society’s Lillian Annette Rowe Sanctuary where she discovered that she could find little information about the river itself. Using research from primary and secondary historical and contemporary sources, literature, and oral histories that she collected, a fascinating story emerges of a river that was once mercurial in its seasonal flows, abounding with diverse wildlife, and mostly devoid of trees and vegetation. As I child I had always heard that the Platte was once “a mile wide and an inch deep,” and Pfost explains why: floods scoured its islands, and prairie fires cleared its banks.  She also describes the changes wrought on the prairie ecosystem as farmers and cities made more demands on its water, not only in Nebraska but in states all along its course as well as the impact of the many dams that have attempted to divert, store, and harness its resources. Tracing the conservation challenges and efforts through the years, both those by governmental and private agencies, Pfost puts into perspective the needs not only of diverse species dependent upon the river habitat but also the demands of an ever-growing human population.

Another channel of This River Beneath the Sky brings the reader’s attention to the flora and fauna of the river, not only the conspicuous sandhill cranes, whooping cranes, and bald eagles but also flickers, bluebirds, house wrens, cowbirds, and the common sparrows. Although I am far from being a “birder,” Pfost opens my eyes to all of facets of bird watching: their nests, their calls, their eccentricities, and their beauty. For her, these creatures are her neighbors and friends, not another name to cross off of an accumulating species list. She cares about them, so the readers do, too.

For each reader, the main stream of this book may differ, but for me, the personal narrative provided the strongest current, unifying all of the diverse elements. Pfost is a transplant to Nebraska, arriving because of circumstance, not choice. A native of the woodlands of Michigan, nothing about the Great Plains is familiar territory. “I hated almost everything when we first moved to Kearney,” she admits. “I sought the only cure that had worked for me in the past–long runs, and lots of them” (129). As she navigates unfamiliar terrain, she begins to feel a part of her new environment, and I emotionally connect with her throughout this odyssey. As her memoir closes, she has become one with her surroundings, perhaps even more connected than those of us who have spent our entire lives here. Watching the last of the cranes depart north in the spring, she writes, “But tonight in the north blind, the calendar stopped–briefly and forever–as we stood beneath and within the living whirlwind of a hundred thousand beating wings, and tonight we’ll all sleep under the same sky” (175). When she finds a feather left by a departing crane, she realizes she has found a home. “The cranes never completely leave Nebraska. I suppose none of us ever completely leaves a place where we have been” (54). 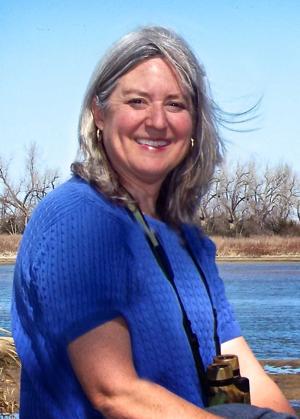 After reading this book, I actually felt the urge to teach freshman composition again, if only to share the inspiring structure and style of this work with beginning writers. However, after remembering the 12,000+ freshman essays that I figure I have assessed in my career, I think I will instead urge other teachers to use it as a text for their own writing classes, both in high school and in college, and encourage other writers to use it as a model.

Structurally, This River Beneath the Sky resembles a matryoshka doll, one of those wooden Russian nesting dolls of decreasing sizes placed one inside another. Although I am not an advocate of excerpting sections of larger texts, believing the whole is more important than the parts, each chapter of this work could stand admirably alone as a model. Each chapter’s introductions and conclusions frame the body and model effective ways to begin and end an essay. For example, in chapter 5, “Of Legendary Worth,” one of my favorite chapters, Pfost begins with a dialogue between herself and the descendant of one of the original homesteaders, John Meyers, who lived near the Platte River. The granddaughter recounts the family history and the dictum passed down to her to never sell the land, the same advice many other Nebraska farmers have handed down through the generations. The essay concludes with the knowledge that although there would be no more heirs to inherit the land, it would be left to a foundation in her grandfather’s name. The content of this same chapter serves as an example of ways to find material to enlarge a topic. Using oral history that she collected, research on the Oregon Trail, description of a personal trip from the headwaters of the Platte River in Wyoming downstream to the Meyers homesteaded land, and literary references to Willa Cather and Herman Melville, Pfost seamlessly intertwines specific details to explain and personalize a small segment of the river.

Sensory appeals and figurative language abound throughout the work, making it a delight to read and exemplary to study. The book begins with the description of a sound, one familiar to everyone in Nebraska. “Their voices arrive first. A distant, soft-edged trill rolls toward the quiet, gray river.” How many of us have heard this same sound and begin searching the skies? “Soon, a flock of birds, flying in a lazy V formation, materializes in the southern sky. As it flies closer, as the voices grow louder and sharper, each grey bird becomes distinct, it neck outstretched, legs trailing behind.” The author then introduces herself and the subject of the book. “I raise my binoculars and watch the slow sweep of wings, the upward flick of wingtips. After ten months’ absence and a daylong flight, two hundred sandhill cranes are announcing their return to the Platte River. . . . The V collapses as the birds cup their wings in six-foot arcs that tip, glide, and tip again, while cranes fall like pattering rain” (1). That, you can tell your students, is the way it should be done.

In addition to learning about the Platte River and its inhabitants, both human and natural, This River Beneath the Sky offers valuable life lessons.  One theme that I think Pfost wants to instill in us is the importance of “reading” nature, of looking around us and actually seeing.  On a walk along the Platte in June, she chances upon some killdeer tracks in the sand. “The killdeer’s tiny tracks intersect chaotically, and here are some larger tracks–long as my hand. The half dozen tracks end abruptly; on the final track, the middle toe left a deeper imprint. This is where the heron pushed off and became airborne” (65-66). By examining the scene in minute detail, she learns the story. “We can see life all around us if only we look: we can feel it with our hands and the soles of our feet” (142). She expands on this theme in chapter 10, “Teaching Ourselves to See.” Quoting writer and environmentalist Rick Bass who instructs “Look closely everywhere” and naturalist Aldo Leopold who advises “speculate why” (156), Pfost warns that we should not be too busy to see. Why look? Why speculate? She explains that it is crucial we share our stories and the stories of nature with others. “Through story, we interpret our own lives and the lives around us” (157). And where should we start? “Start with the ground beneath your feet,” Pfost recommends (170). This just begs teachers to take their students on a field trip, perhaps even to an adjacent football field or nearby city park, doesn’t it?

Although one can enjoy the sandhill cranes dancing and feeding in the cornfields bordering the Platte River, scan the skies as they head en masse for the river in the evening, and even view them on the internet crane cam, nothing can equal the breathtaking adventure of actually sitting among thousands and thousands of them in a Sanctuary blind. This River Beneath the Sky not only perfectly captures this sensory experience but adds depth, breadth, and understanding of the place they call home for those few weeks. If you would like to read more of Pfost’s writing, browse her website, A Naturalist Walks Home.

2 thoughts on “This River Beneath the Sky”