Nine Boys and Some Horses 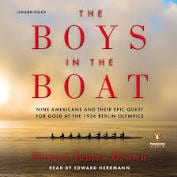 In the last few years, I have become intrigued by all of the complexities of World War II, a conflict that impacted my own parents, and I have read several good books about this era, some fiction and some nonfiction. I began by reading Unbroken (2010) by Laura Hillenbrand, the true story of  Louis Zamperini, who competed in the Berlin Olympics and then survived the horrors of Japanese prisoner of war camps. In the Garden of the Beasts (2011) by Erik Larsen describes the life of William E. Dodd, America’s first ambassador to Hitler’s Nazi Germany, who watches Hilter’s bloody rise to power. Two novels have also added to my backgound knowledge.  All the Light We Cannot See (2014), a story about a blind French girl and a young Nazi soldier, and The Nightingale (2015) by Kristen Hannah, a narrative about two sisters with very different roles during the occupation of France.

Last summer, two more books came to my attention. The 2016 Rio Olympics spurred me to read The Boys in the Boat (2014), and because of the background I learned about the sport from reading the book, I became an avid rowing fan during the summer competitions. When I heard about the upcoming publication of The Perfect Horse (2016) that was also set during World War II, I could not wait to purchase it since I have been a horse lover since birth.  From both nonfiction works, I have discovered even more horrendous acts instigated by Hitler than I had already known.

In The Boys in the Boat, Daniel James Brown follows the career of nine working class boys on the University of Washington’s rowing team and their coaches during the Great Depression as they competed against their rivals at the University of California at Berkeley. Ultimately, they defeated the elite teams on the East Coast, such as Harvard, Yale, and Princeton, to earn a trip to the 1936 Olympics in Berlin, presided over by Adolph Hitler. The boys practiced during all sorts of weather, often enduring excruciating pain, to become one, a team so attuned to one another that they achieved “swing,” a perfect rhythm that produced maximum speed when the coxswain yelled through his megaphone, “Give me ten big ones!” This unlikely team defeated the Germans despite all of the odds against them. Not only did two of the boys fall desperately ill in Germany before the race, but the Germans rigged the starting signal and placed the American boat in the worst lane, one plagued by crosswinds. Their victory over aristocrats and the Nazis reaffirmed American’s belief in the common man and in everyone “pulling together” to overcome all odds.

The rescue of more than five hundred horses in 1945 is the historical event chronicled in The Perfect Horse by Elizabeth Letts. Hitler had chosen Gustav Rau to develop a “perfect” breed of military horses, so during World War II, he gathered the finest horses from Europe, including Polish Arabians, Thoroughbreds, and Lipizzaners to begin his breeding program. However, with the impending defeat of Hitler’s troops and the advance of starving Russian troops, the horses were in danger of being hidden by the Germans or eaten by the Russians. General George Patton gave to order for the covert operation to Colonel C “Hank” Reed, and with the cooperation Lieutenant Colonel Hubert Rudofsky and veterinarian Captain Rudolf Lessing, the horses were transport to American occupied territory. Ultimately, 244 Lipizzaners were returned to Austria and other Arabians and Thoroughbreds became “spoils of war”and were transported to the United States.

Although both books present accurate and detailed accounts that are amazingly well researched,  The Boys in the Boat laps The Perfect Horse in storytelling. It is not about the authors’ literary pedigrees, for both writers have impressive backgrounds. Daniel James Brown taught writing at San Jose State University and Stanford as well as working as a technical writer and an editor. Currently, Brown focuses on writing narrative nonfiction full time. His other books include The Indifferent Stars Above: The Harrowing Saga of a Donner Party Bride (2009) and Under a Flaming Sky: The Great Hinkley Firestorm of 1894 (2006). On his author website, he explains, “My primary interest as a writer is in bringing compelling historical events to life as vividly and as accurately as I can.”

Elizabeth Letts majored in history at Yale and studied creative writing under John Hershey, a Pultizer Prize winner. She has written two novels, Quality of Care and Family Planning, an award-winning children’s book, and the non-fiction work The Eighty-Dollar Champion, the story of a plow horse who became a champion jumper. Moreover, she has a lifetime of equestrian experience herself, and Letts has won numerous awards for her books.

Both books involve a huge cast of characters as well as scenes set in both America and Europe, so it isn’t the complexity of the two that differ. In addition, each has one primary goal or narrative arc, either winning the Oympics or saving the Lipizzaners from extinction. I think the reason that The Boys in the Boat held my interest more than The Perfect Horse was that Brown focused not on just the facts of the events leading up to the Olympics but, instead, on the personalities of the boys and their intimate struggles; he made me as a reader care and empathize with them, both physically and emotionally. Not so with Lett’s characters. Somehow I just could not connect with the protagonists Hank Reed, Alois Podhajsky,or Tom Stewart although Hitler’s chief horse-breeder, Gustav Rau, was a despicable villain.  Perhaps the difference is that Brown was able to draw from the young men’s journals and logs as well as personal interviews with them, and that made his characters come to life.  Letts did her research, too, but she had only historical facts with which to work, and while I admired the courage it took to save the horses, I could not connect emotionally with any of the men or even the horses, Witez the Polish Arabian and Neapolitano Africa, Podhajsky’s Lipizzaner. Black Beauty or The Black Stallion it wasn’t. Perhaps that was the problem: I expected a story about a horse, and it was a story about a war.